I have not taken my camera to guild meetings for the last few months so I'm sorry, but I have no pics to share with you.
With all the horror of the Japanese nuclear disaster and tsunami many quilts are being sent overseas.  Northcott Fabrics organized a shipment and our guild contributed three quilts.  Here's a link to one of Northcott's blog posts where we are credited.

We meet on the 2nd Wednesday of the month from September through June. December and June are pot luck supper nights.

WHO?
We are a bunch of women who enjoy sewing and quilting. We are only too happy to include complete beginners so don't be shy. Hanging out with people who share your interests is the BEST way to learn and enjoy your hobby. We currently have about 45 members so it's easy to get to know each other.

WHAT?
No, we don't sit around and quilt. We have social time and a little bit of business related to what we are doing as a group. We have small side groups who swap quilt blocks or fabric. We have raffle draws. We have 'show & tell' time with our latest quilts. We have guest speakers who come with lots of quilts to talk about. We have lessons and learn a new technique. We have work nights to stitch up a charity quilt. Hmm, lots of stuff (but not all on the same night).

HOW MUCH?
Annual membership is $50.00. If you prefer to come on an occasional basis you may pay a $10.00 visitor fee instead.

STILL HAVE A QUESTION?
Send an email to helenmaryhubert@gmail.com with a heading of 'guild question'. 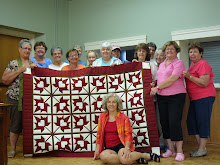